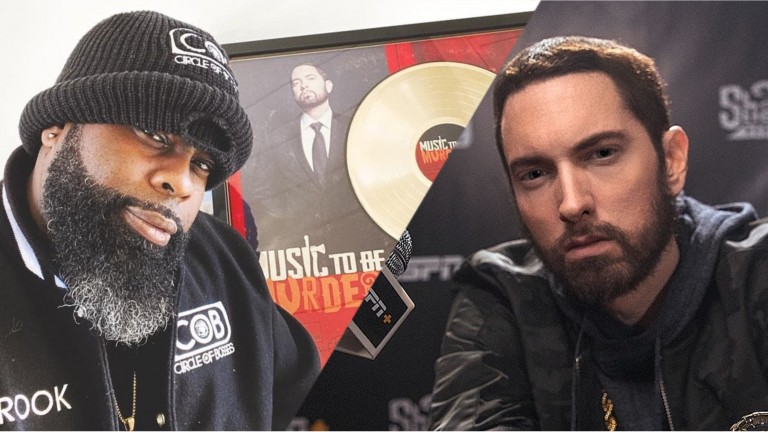 KXNG Crooked is one of Hip Hop’s most respected MCs, so much so he can call Eminem a close friend. The former Shady Records artist was one of the few people Em sat down with for an interview as he was promoting Music To Be Murdered By last year. Eminem also dubbed him the most underrated rapper ever in May 2020.

Being in such close proximity to arguably the most famous rapper in the world presents its own set of challenges when it comes to Eminem’s fans — they always want to know what Slim Shady is up to behind the scenes. On Sunday (May 30), KXNG Crooked was asked if Eminem would be appearing on his forthcoming album and Crooked quickly made it clear he was going to keep his mouth shut, responding with a carefully selected emoji.

Some people thought that was an obvious yes, while others were just happy to be getting another KXNG Crooked album at all.

But the inquiries about KXNG Crooked’s famous friend doesn’t appear to be too bothersome. When another fan asked if he ever got “tired of the constant questions” about Eminem, he replied, “Nah it’s cool…I’m here to talk rap wit y’all plus I know a lot of other rappers we discuss as well and it doesn’t bother me when they’re brought up.”

More recently, Eminem snagged Crooked for the Music To Be Murdered By track “I Will” featuring fellow Slaughterhouse alum Joell Ortiz and Royce Da 5’9. Needless to say, their collaborative relationship continues to grow and evolve, but fans will just have to wait to see if Eminem indeed pops up on Crooked’s follow-up to 2017’s Good vs. Evil II: The Red Empire project.